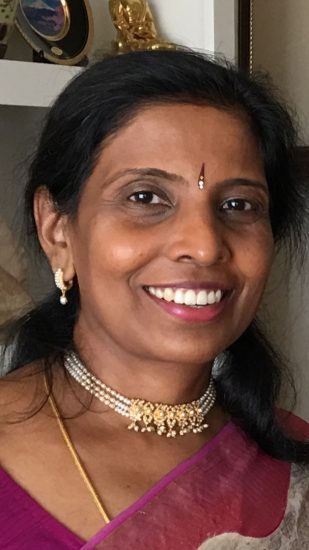 Sankari Senthilkumar is a Sangeeta Vidwan title holder of the Central College of Carnatic Music in Chennai South India.
She started her teaching career in 1989 at the auspicious Malibu Venkateshwara Temple in Los Angeles and continues to date, coaching students with a goal of uplifting them to professional status.

Sankari is a devotee of Pujya Sri Mathioli Saraswathi Amma since 1997 and Sri Amma has been instrumental in the development of Sankari’s music career. Her music school was named as Sahana Music School by Sri Amma in 2005. In 2010 Sankari was awarded the title of Vidya Vaahini by Sri Amma during her 70th birthday celebration. Sankari has released two music compact disc albums to her credit, the first one in association with Rajarajeshwari Peetam in Rochester, New York and the latest, Divine Melodies, in association with the Hindu Temple of Antelope Valley in Lancaster, California. Sankari was given the auspicious responsibility to compose music for the songs Sri Amma wrote for the deities of the temple in Antelope Valley.

Sankari and her students have participated in all the Nandalala Mission programs in Los Angeles and local temple festivals.